“Those who do not know history are destined to repeat it.” – Edmund Burke 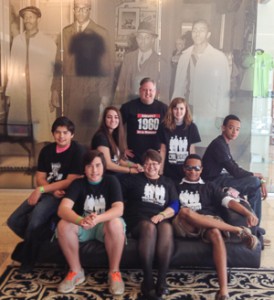 After a transformational roadtrip on Saturday, March 15 to Greensboro, one of St. Peter’s youth, Kyle Cathey, shares the above quotation as a reminder that we must learn and grow in Christian love for all people, as our Baptismal Covenant requires. As a step in our continual journey toward reconciliation, six St. Peters “Yutes” and two adult leaders, to quote Kyle, “took a historical journey to Greensboro, North Carolina to achieve a greater understanding of the inequality of ‘negroes’ in American society.” The following are the impressions that Kyle and his J2A classmate, Callan Ghareeb, share in response to our visit to the International Civil Rights Museum at the former Woolworth’s in downtwon Greensboro.

Kyle Cathey: We found a museum that provided us with valuable and disturbing information about life for blacks in the racially divided South. One event was the main theme of the entire museum: The Greensboro Four. On February 1st, 1960, four freshmen at North Carolina A&T University bravely risked their lives when they sat in the white’s only section of the lunch counter at the F.W. Woolworth store. These four men were Joseph McNeil, Franklin McCain, Ezell Blair Jr. and David Richmond. Their request to be served was rudely denied. With their heads held high, the four men left — for the drink of hateful racism could not quench their thirst for equality. Word of their courageous act spread to the other students of A&T University and then to the citizens of Greensboro, NC. As a result, multiple sit-ins of black and white students longing to desegregate the lunch counters at Woolworth took place. Throughout the sit-ins, occupants remained strong, resilient, and non-violent for many months, and on July 26, 1960, the F.W. Woolworth store was finally and officially desegregated. This sit-in was the beginning of many in the US. Aside from the original lunch counter, the museum housed other educational displays. Our tour guide led us through a dark hallway called the ‘Hall of Shame,’ which Callan Ghareeb tells us about in her essay. The final exhibit presented us with thousands of pictures of individuals from all races who have made life achievements that changed the world. All in all, the tour was superb and I am grateful for this experience!

Callan Ghareeb: As you enter a set of heavy metal doors, the first thing you see is the white hood and robe a clansman from the Ku Klux Klan would wear. Above the doors you see, “Hall of Shame.” Before you enter, your tour guide informs you that there will be graphic and disturbing images and may not be suitable for children. Everyone knows what will be presented in the next segment of the museum, yet no one leaves, not even those with children. Through the doors you can see shards of broken glass, not yet lit up to show their demons. Upon entering the shards light up and you see grotesque images of people, mostly dead bodies, horribly disfigured from violence. The hallway is dark as you walk through, examining each picture and listening to the story behind it. There is a picture of a young black girl with cloth covering eyes after a bomb exploded in her church, leaving her permanently blind and killing her older sister and three friends. One another is the body of Emmett Till, a fourteen-year-old black boy who was kidnapped and murdered after, supposedly, whistling at a white woman. His body was then thrown into a river, leaving him unidentifiable if not for the ring he always wore on his finger. The picture of Emmett’s body was taken at his funeral, where his mother chose an open casket, so that everyone could see what they did to her boy. On another shard is a picture of the bodies of two black men, hanging from the limbs of a tree. It is accompanied by a picture of the body of a black person, burnt to a crisp by KKK members. Next to this is a shard of glass depicting a KKK burning that occurred in Connecticut in the 1980’s. There is a picture of a bus that the Freedom Riders used to cross the country spread across several shards of the glass. But this bus is different from the others they used, for this one is burning from a fire set by white supremacists. A picture of a policeman holding a black man in place as he allows his canine to viciously attack the man joins this. There are numerous other shards, each showing a hate crime just as horrible as the ones listed above. It is hard to walk through this hall without crying. It is even harder to walk through this hall knowing that your ancestors did this. But it is necessary, for learning about it in school is not enough. To truly understand what went on in the civil rights era, one must walk through this hall and look at the portraits of innocent people attacked in the way that they were. It strikes you just how real it is and, as you exit, you almost feel required to shake your head in shame.