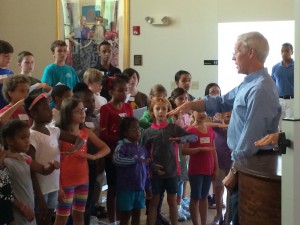 “How awesome is this place! This is none other than the house of God, and this is the gate of heaven.” –Genesis 28:17

As summer ends, The Choir School at St. Peter’s begins its 22nd season, the Evensong Series begins its 13th, and the Center City Concert Series begins its 2nd. Although the St. Peter’s Choir has sung throughout the summer, at this time of year they refresh their commitments, re-invigorating their service to our parish. For the Music Department, August and September are full of activity and promise. “How awesome is this place,” indeed.

Choir Camp begins The Choir School year and was held August 11–15. New and old choristers met and began forming friendships, while each ensemble started new repertoire. The Boys and Girls Tour Choirs sing their first service Sunday, September 28 at 5:00 p.m. This service will feature the spritely Magnificat and Nunc dimittis written in 1994 for the National Cathedral, Washington, D.C., by American composer, David Hogan. Cabaret Night is their first concert, October 10 at 7:30 p.m.

The MasterSingers begin 2014 thinking of their 2015 residency at Salisbury Cathedral. They will prepare pieces for that experience which also appear in services including their first Evensong, September 14, and concerts at home. A small group of adult singers will be preparing for Salisbury with the teens—a great collaboration. The MasterSingers have extra performances throughout this year to raise funds for their travels. We call it “singing for our supper,” with the first scheduled at Davidson College Presbyterian Church, September 9 at 7:30 p.m.

The first concert of the Center City Concerts is a program of organ concertos with orchestra. St. Peter’s Associate Organist Aaron Goen will play music by Canadian composers Rachel Laurin and Derek Healey, among others. Conductor William Osborne will lead two performances on September 15, an hour at noon and a full-length concert at 7:30 p.m.

As The St. Peter’s Choir begins its season, they will say goodbye to Aaron Goen and will prepare to welcome a new assistant Organist and Choirmaster. We are looking forward to another year of beautiful worship and music making.