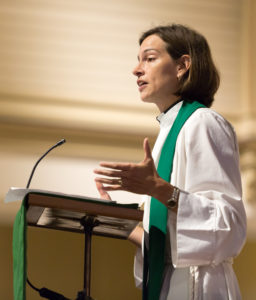 When I worked as a social worker, I discovered that one of the best ways to establish rapport with someone new is to ask about how they got their name. I would learn all sorts of helpful information about the person and their family of origin, and asking the question conveyed my genuine interest in getting to know them and hear their story.

On Sunday January 1, we celebrate The Feast of the Holy Name. This year we are fortunate that the Feast is on a Sunday so that we can worship together on this special day. Mary and Joseph followed the Jewish custom of having their son circumcised and officially “named” when he was eight days old. Unlike many parents who agonize over the decision of what to name a baby, Mary and Joseph had clear direction from angels that their child would be named Jesus, meaning “he saves.”

Our church bears St. Peter’s name. Of course, it was customary for the first church in a town to be named after St. Peter in both Episcopalian and Roman Catholic traditions. That’s why there are two “St. Peter’s” churches (ours and the Roman Catholic one) on Tryon Street. What does it mean for us to be named after Peter? How do we reflect both his strengths (honesty, boldness) and some of his pitfalls (fear, obsequiousness)? How might we more fully grow into the name we’ve been given as Peter, the “rock” on which Jesus built and continues to build his church? Perhaps the old Gospel song is right: “There is power in the Name…”

This week I challenge you to ask at least one other parishioner the story of their particular name to get to know and love one another better and to celebrate that in God’s eyes and through the waters of baptism we also all share the name Beloved.