[av_toggle_container initial=’0′ mode=’accordion’ sort=”]
[av_toggle title=’Formation and Worship Offerings’ tags=”]
This Wednesday, January 4, at 7:00 PM: Waking Up White Book Discussion St. Peter’s has an ongoing commitment to racial justice, viewing it as essential to God’s work of reconciling all people to Godself through Christ. We are starting off 2017 with an accessible and provocative book about one white woman’s journey to discover how being white has affected every part of her life. We will be discussing book themes on two Wednesday nights, January 4 and 11, 7:00–8:00 p.m. If you plan to read the book and attend one or both of these clergy-led discussions, contact Ministry Associate, Elaine Wood (ewood@st-peters.org, 704-749-6141).

Friday, January 6, The Feast of Epiphany and the Burning of the Greens. On Friday, January 6, after the Twelfth Day of Christmas, all are invited to celebrate the Feast of the Epiphany with Holy Eucharist and Burning of the Greens at 6:00 p.m. Bring one or two small sprigs or branches from your Christmas tree, wreath, or garland to add to the “Light of Christ” fire that will be lit after the liturgy in the churchyard. Last year, this occasion was a powerful scene that drew passersby as well people dining at nearby restaurants. Families with children, in particular, have enjoyed this special feast.

Sunday Formation for Adults, January 8, 9:30–10:30 a.m. The Parish Hall Forum (second floor, Parish House) will feature an “instructed Baptism,” in which we’ll talk through the Baptism liturgy and unpack the deeper meaning of this foundational sacrament of Christianity.

Sunday Evenings at St. Peter’s Resumes January 8 with Evensong. Spread the word about a great contemplative way to begin the week: worship on most Sundays at 5:00 p.m. On most second and fourth Sundays, Choral Evensong and Holy Eucharist is offered. On every third Sunday, a piano-enhanced, meditative Taizé Holy Eucharist is offered. January 8 will launch the new year with Choral Evensong led by the Clergy and the Burli Singers. The January 2017 schedule for Sunday Evenings at St. Peter’s is available by clicking here.

Weekday Morning Prayer and Noon Eucharist. Monday–Friday, 8:00–8:30 a.m. Morning Prayer in the Chapel of the Saints is a beautiful offering for the start of the day. On Tuesdays at Noon, we offer a 30-minute celebration of the Holy Eucharist in the Chapel. All are most welcome and encouraged to bring guests to join them for any and all of these weekday offerings.

“Try On” Evensong at St. Peter’s. One of many things that makes life at St. Peter’s both unique and meaningful is our commitment to offering the rich historical liturgies of the Episcopal/Anglican tradition. In 2017, the Clergy and the Director of Music and Organist invite all members to “try on” Evensong, which is offered most second and fourth Sundays at 5:00 p.m. Evensong is sung Evening Prayer and draws on the vast Anglican musical tradition. If you’ve missed the morning liturgy, or simply want to try something new, join us! On Sunday, January 8, our Associate Rector, The Reverend Joslyn Ogden Schaefer, will serve as the Officiant and Celebrant before her leave-taking for new ministry in Western North Carolina. Our Rector, The Reverend Ollie V. Rencher, will serve as a chorister with the Burli Singers, directed by St. Peter’s Choir member Rob Burlington. What are people saying about Evensong? Read “More Evensong, Please” from The Living Church.

Winter-Spring 2017 Worship, Programs, and Events Calendar. Watch for a special eNews, service leaflet notices, website updates, and bulletin boards in the Parish House lobby to discover a host of parish life offerings for adults, youth, and children between January and June.
[/av_toggle]
[av_toggle title=’Events’ tags=”]
Supporting Center City Concerts. The Board of Directors for this non-profit organization based at St. Peter’s is seeking donations to support the offering of “free” concerts at St. Peter’s. If you are interested and able, read a letter from Board Chairman Paul Keller at www.centercityconcerts.org/appeal or donate online at www.centercityconcerts.org/donate-now. The next performance, in celebration of the Martin Luther King, Jr. holiday, will be on Monday, January 16 at Noon, featuring the Charlotte Contemporary Ensemble Gospel Choir.

Young Adults First Sunday Brunch. Mark your calendars for February 5 at 12:30 p.m. when young adults will gather after the 10:45 a.m. liturgy for brunch at a restaurant within walking distance of St. Peter’s. Email Mary Gotschall with questions.

Holy Chow Breakfast on January 8. This Sunday weekly fellowship, 8:30–9:25 a.m., resumes after a holiday break to offer a hearty breakfast in the Community Room (second floor, Parish House). This is a relaxed way to meet others of the parish family and visitors, after or before worship, but before formation offerings at 9:30 a.m.

Leave-taking Reception for The Reverend Joslyn Ogden Schaefer, Sunday, January 8. A reception to honor the ministry of The Reverend Joslyn Ogden Schaefer will take place Sunday, January 8 in the Parish Hall after the 10:45 a.m. liturgy. All are invited to this festive thanksgiving occasion. On December 5, our Rector shared news that our Associate Rector has accepted the call to serve as the Rector of a parish in the Diocese of Western North Carolina. Her last Sunday at St. Peter’s will be January 8. Read their letter to the parish family or pick up a copy in the Parish House lobby.

Thanksgiving Purse in Honor of The Associate Rector. If you would like to offer a financial gift in thanksgiving for the ministry of The Reverend Joslyn Ogden Schaefer, you may join others in filling a “purse” for her journey. Checks should be made payable to “St. Peter’s Church” (Memo: Associate Rector’s Ministry) and directed to Parish Administrator, Leigh Dixon.

Parish Intern to Serve at St. Peter’s in 2017. Beginning January 3, Mrs. Robin Sands will become a part of life at St. Peter’s as part of the 10-month internship required for the diocesan ordination process for Vocational Deacons. As Parish Intern, Robin will collaborate with the Parish Clergy to learn, support, and serve in ministry areas, such as liturgy, pastoral care, outreach, social justice, and congregational development, and be among us on a weekly basis. Stay tuned for more about Robin and her family, who are active members of St. John’s Episcopal Church in Charlotte.

March 1: Ash Wednesday and the start of Lent 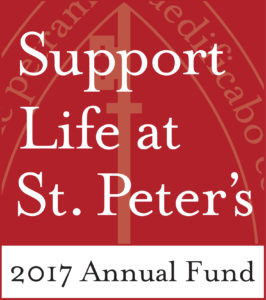 2017 Annual Fund Update – December 30, 2016: As of Friday, December 30, 325 pledges totaling $858,210 have been received toward our $975,000 goal. The Annual Fund Leadership and Vestry Class of 2016-2019 are grateful for each pledge received and seek 100% participation from all member households. To pledge online today and offer your support, visit www.st-peters.org/annualfund, or you may pledge at the Parish House. Our total amount pledged continues to grow for the completion of a 2017 budget to be presented by the Treasurer and Finance Committee to the Vestry on January 17.

[av_textblock size=” font_color=” color=”]
Submitting Communications Requests: Please send all submissions for the eNews and Sunday leaflets, as well as any questions related to communications, to communications@st-peters.org. The deadline for submitting information for publication during the coming week is Sunday at 8:00 p.m. Provide all pertinent details, including date, time, location, any fees or other costs, a brief description of the event, links to any additional information available online, any deadlines, and the name, email address and phone number of the person to contact. If you do not have email access, you may leave a detailed message at 704-749-6142. Spread the word about this process.
[/av_textblock]