Set us free, heavenly Father, from every bond of prejudice and fear: that, honoring the steadfast courage of your servants Absalom Jones and Richard Allen, we may show forth in our lives the reconciling love and true freedom of the children of God, which you have given us in our Savior Jesus Christ, who lives and reigns with you and the Holy Spirit, one God, now and for ever.   ­– Collect for the Feast of Absalom Jones, Lesser Feasts and Fasts, 2006. 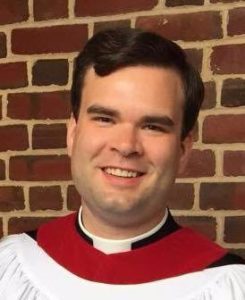 The Episcopal Church Calendar of Saints Lesser Feasts and Fasts, contains the following biographical information for The Reverend Absalom Jones, first African American Episcopal priest (1746-1818): In 1786 members of St. George’s Methodist Episcopal Church in Philadelphia decided that black members of the parish should sit only in the balcony. Two African American Sunday worshippers, Absalom Jones and Richard Allen, whose enthusiasm for the Church had brought many African Americans into the congregation, learned of the decision only when ushers tapped them on the shoulder during the opening prayers, and demanded that they move to the balcony. Jones and Allen walked out, followed by many others.

Absalom Jones conferred with William White, Episcopal Bishop of Pennsylvania, who agreed to accept the group as an Episcopal parish. Jones founded St. Thomas African Episcopal Church in Philadelphia as lay reader, and, after a period of study, was ordained a deacon and priest to serve the parish as rector. Richard Allen went on to found the African Methodist Episcopal Church, the first predominately African American denomination in the United States.

The legacy of Absalom Jones is profound. Known for his speaking skills, he galvanized the Episcopal Church toward equality long before emancipation. The Feast of Absalom Jones is February 13, and there are several opportunities to celebrate his life at St. Peter’s.  The first opportunity is a Diocesan celebration at the Episcopal Church of the Redeemer in Greensboro on Saturday, February 10 at 10:30 a.m. The second opportunity is the Sunday Parish Hall Forum at St. Peter’s at 9:30 a.m. The clergy will lead a presentation on the life of Absalom Jones, and the implications for us today.

The final opportunity this weekend is the God’s Tapestry Potluck and Conversation. Following the 10:45 a.m. Holy Eucharist, members of the community are invited to gather in the Parish Hall for lunch and conversation. Please bring a dish you would serve at a family holiday. If you are unable to bring a dish, join us anyway. We will engage in conversation using the Diocesan “Go Speak: Reconciliation” cards, which will invite us to reflect on the beautifully diverse tapestry of our community at St. Peter’s.

Whether you are able to engage in one or all three opportunities, please join me in giving thanks to Almighty God for raising up faithful witnesses and prophets like Blessed Absalom Jones.