Join us on Sunday, as we celebrate the feast of Christ the King and learn more about supporting the important work of Episcopal Relief & Development. 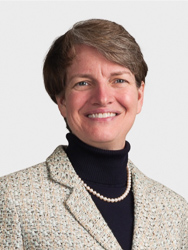 Prior to joining Episcopal Relief & Development, Josephine was trial lawyer and has 30 years of experience litigating disputes for a wide range of clients, including public utilities, manufacturers and other businesses. Most recently, she was a partner with Parker Poe Adams & Bernstein, LLP in Charlotte, North Carolina.