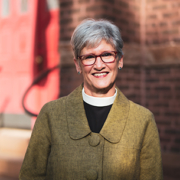 My friend Corey tells a story about a priest she met in Italy who gave up his charity work with children after a conversation with Mother Teresa. She tells the story better than I can (here’s the link to her blog: “Revelation in the Wreckage”) but for those who don’t mind spoilers, it was because this icon of charitable work challenged him to listen deeply to God’s call in his life. Had he been doing good work? Of course he had. Had he been making a difference in the lives of children? Yes, that, too. Her admonition to him was neither to quit his work nor to do it better but, instead, to listen to his deepest longing for what God was calling him to do.

What appeared to be selfish–become a hermit/author–was actually a leap of faith: embracing his passion while trusting that God would care both for him and for the children. It took an enormous act of faith to step away from what seemed to depend entirely upon him, to leave it in other capable hands while taking up something unproven, seemingly selfish, and fueled only by desire to be closer to God’s movement in his life.

Today, years later, he’s the author of numerous books that may have changed more lives and fed the souls of more of God’s children than anything else he ever did. God works like that. And now during Advent we’re advised to let God work that way with us. To hold lightly that which we think we “have” to do–even good, Christ-centered work–to go with God on a journey of faith beyond what we imagine it to be. This Advent, consider Mary and all those who’ve listened and acted on a call that appeared to be this-world crazy. This Advent, consider those longings and passions just beneath the surface in your own soul and place them in the presence of God’s grace, praying with Mary, “Here am I, the servant of the Lord; let it be with me according to your word” (Luke 1:38).