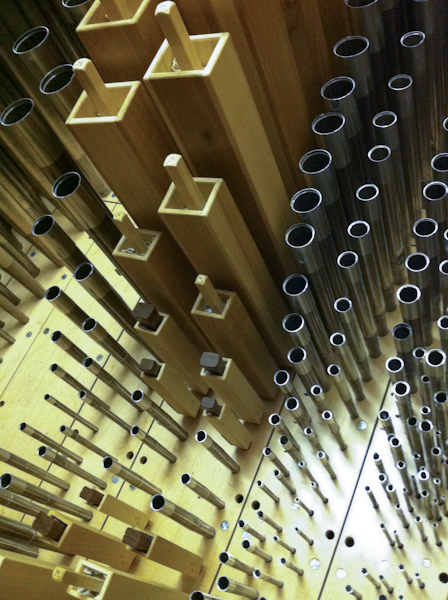 Opus 136 contains seven reed voices. The Great and Swell Trompette stops are both modeled after the work of Cavaillé-Coll and exhibit the free-wheeling, bass-weighted characteristics of French trompettes. The Swell Basson 16′ and Hautbois 8′ are also based on the work of Cavaillé-Coll. The Basson, with full-length conical resonators, is, due to its shallot construction, much more restrained than either of the Trompette stops, but it adds a substantial layer of growly 16′ foundation to the Swell division. The Hautbois, designed and voiced to bring to mind the sound of the orchestral oboe, is an important stop in much of the organ repertoire. Its placement in the Swell box, together with its cantabile, faintly melancholy timbre, makes for a highly expressive, gentle solo voice. The Choir division contains a nineteenth-century Clarinette 8′, a partial-length cylindrical reed. Mildly imitative of an orchestral clarinet, it is another of the organ’s important solo colors. The Pedal Posaune 16′, together with its 8′ Trommet extension, is a large-scaled reed voice based on the work of the influential late seventeenth-/early eighteenth-century North German builder Arp Schnitger. It provides a powerful, foundational underpinning to large combinations on the manuals.